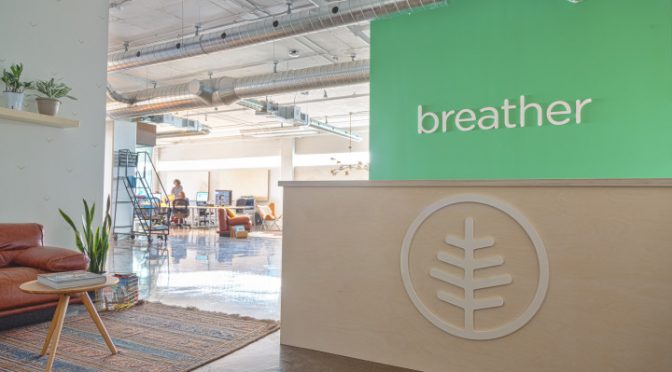 Breather Products, a flexible workspace provider based in Montreal which has raised over US$150 million to build its global business is now selling most of its assets to Industrious National Management Co. for US$3 million.

Industrious is a co-working company with a strong backing by real estate giant CBRE.

Jamie Hodari, Industrious chief executive officer confirmed the acquisition. He expresses the company’s excitement over the purchase, adding that they would be good stewards of what they are buying.

Although Hodari would not confirm the price, some sources say that the deal is valued at US$3 million.

Before the deal, Breather has not been doing well over the past two years. Founded in 2012 by business book author Julien Smith and designer Caterina Rizzi, the company has become one of Canada’s startup darlings. They have amassed a significant amount of investments from Silicon Valley investors such as Menlo Ventures and Peter Thiel’s Valar Ventures.

Breather signs long-term leases and rents the spaces out at higher rates to clients for shorter periods. As of early 2019, when Bryan Murphy, a former eBay executive succeeded Smith, the company already has 16,000 clients which include Google, Apple and Royal Bank of Canada. They also have around 500 spaces in major cities including San Francisco, New York, Toronto and London. The company’s revenue as of that year surpassed US$35 million.

The series of misfortunes that Breather experienced started in August 2019, when the parent company of WeWork, another coworking giant went public. Investors raised eyebrows at its business model and overall operations. As a result, the company reduced its valuation and pulled its IPO, resulting in employee layoffs and ultimately its CEO.

Breather did raise investments between US$35 million and US$40 million, but only past investors ponied up. This in turn devalued the company to around US$100 million after the funding. That same year, they laid off 17 percent of its workforce as a cost-cutting measure.

Breather was slowly recovering in 2020 with 95 percent of its new spaces being rented out to clients. They started to expand and the revenue grew.

Then the pandemic hit and their occupancy dropped to only 25 percent by last fall. Other flexible workspace companies were hit just as hard.

The company did their best under the situation but to no avail. Breather’s owners just wanted to cut their losses and were ready to sell.

In total, Breather fielded three bids, and each one at a fraction of its peak value. Industrious gets Breather’s brand name as well as the technology and around 10 to 15 engineers.