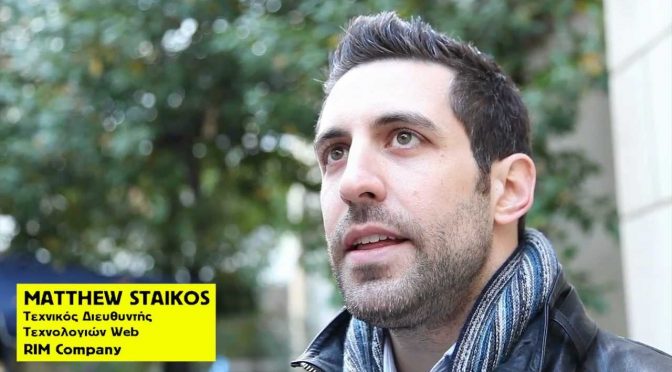 Described as very charming and friendly by his friends, Matthew Staikos, mostly known for selling his startup company to Blackberry, was murdered in a matter of seconds.

He was walking and chatting with a friend in an upscale Yorkville Toronto neighbourhood on a warm Monday night, when a man from a nearby parked Mercedes jumped out of a car, approached Matthew from the back and shot him in the head. Reportedly there were between 3 to 5 shots fired.

The shooter was described as black male , about 5’10.

The incidents of gun violence we have seen in our city in the past few days are shocking and can in no way be accepted or brushed aside. As Mayor, I am troubled by every act of violence in our city regardless of where it happens. pic.twitter.com/NCt9Oa8Gt9

Mathew Staikos studied mechanical and computer engineering at University of Toronto. With his brother George they started a company called Torch Mobile in 2008. Torch Mobile uses the open-source web browser layout engine WebKit to create web applications for mobile phones, Within few years the company was sold to Blackberry for undisclosed amount.

37-Year-old Matthew Staikos, proud Greek and successful Canadian citizen, made us all proud of his without limits love to his mother country and his great achievements in Canada. So this evening, it is honestly so hard to believe the news of his loss. I met him at the time he was trying to established. And I immediately realized that he was going to make it and that he would go high. But I never thought he’d leave us so quickly, so unjustly, so violent.

I read and reread the news in Canadian media and I don’t want to accept that this wonderful man and friend will no longer be among us. But I’m sure his soul has already found its place under the eternal light of God in which he believed himself. The most warmly and through the bottom of my heart condolences to his family. Sometimes it is impossible to express the anguish of our soul. One of these times is also for me tonight writing these lines for my friend Matthew.