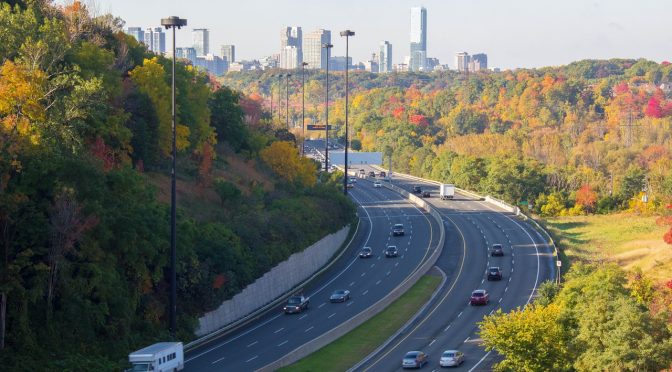 Big Brother is getting ready to fly overhead to make sure drivers are abiding by the rules of the highway code in Ontario.

Government of Ontario is studying  a way to unleash hundreds of drones around The Greater Toronto area to make sure motorists who take a high-occupancy toll lane are actually authorized to use it.

The way the technology will work is that drones will scan the body heat in the car to see how many people are actually in the car , and if not the right amount of people, The Ministry of Transportation might send you a ticket in the mail.

Government has given the contract to The Sky Guys, a Drone Technology company in the Toronto area. Jeremy Wang, The CTO behind Sky Guys said:

“Our solution is a long range drone. The idea is that the drone is flying just off the side of the highway. It has an on-board camera and snaps pictures from the front, side and back views of each car. Basically we have our own proprietary software that can count the number of people inside and then a report gets sent to police if there’s less people than they’re should be. (A ticket) is linked to your licence plate.”

“All solutions developed will need to adhere to the relevant regulations, including privacy regulations.”

@gilldeacon wish you'd grilled the owner of a private drone company paid by the Ontario government to monitor/spy in Ontario drivers on HOV lane highways. Sounds like a huge privacy violation, safety issue and should be the work of the OPP

This story brings 1984 book by George Orwell to mind, where the overzealous government oversees citizens every move. The book wrestles with oppression in a place where the Party scrutinizes human actions with ever-watchful Big Brother and defying a ban on individuality.

Imagine drones will start watching you to see if you have enough people in your car to use car lane, then if you speed, then if you fully break at the stop sign.

“Big Brother is Watching You. Until they became conscious they will never rebel, and until after they have rebelled they cannot become conscious.”