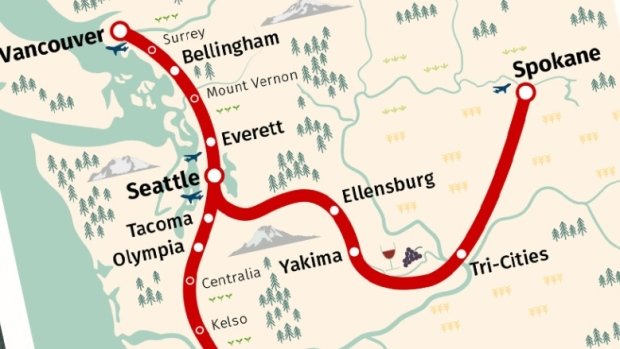 Update: While High speed train is being studied by both provincial and state governments, a private company, Harbour Air Seaplanes, has launched a seaplane that gets you in Seattle in around 1 hour from Vancouver.

The tickets are around $400 but if speed is what you are after – this will be the best option for you right now.  Please note Nexus, Enhanced Drivers Licenses and passport cards are not accepted at this border crossing. Passport is Required.

Who needs Amazon HQ2 in Canada, when you can soon be able to  travel by high speed train reaching speeds of about 400 km/h from Vancouver to Seattle. This means you can live and enjoy your free health care in Vancouver Canada while working and making double Canadian salary at Amazon HQ in Seattle in under 1 hour. Right now same that same trip takes around 4.5 hours.

British Columbia Premier John Horgan spoke approvingly of the possible high speed train after it was announced that BC provincial government will spend additional $300k to study the plan while Washington state approved funding of up to US$1.2 million toward the new in-depth study. “It’s our view that this is an opportunity that we shouldn’t let pass by. It’s a physical link between our two jurisdictions and one that will get cars off of the road and will move people and goods in a fast and effective way.”

“The convenience of a one-hour trip between Vancouver and Seattle would create countless opportunities for people in both B.C. and Washington, from sports or concert getaways for families, to untold economic growth potential for businesses. Exploring the possibility of creating a clean, efficient high-speed corridor is particularly important as the Pacific Northwest grows in economic importance, and we look to reduce barriers to expansion across our borders.”

This train corridor service would cut travel times between Vancouver and Seattle to about 60 minutes, from three to five hours.

If train link is successful it can help create up to 200,000 jobs for B.C. and U.S. workers, and generate billions of dollars in economic benefits.