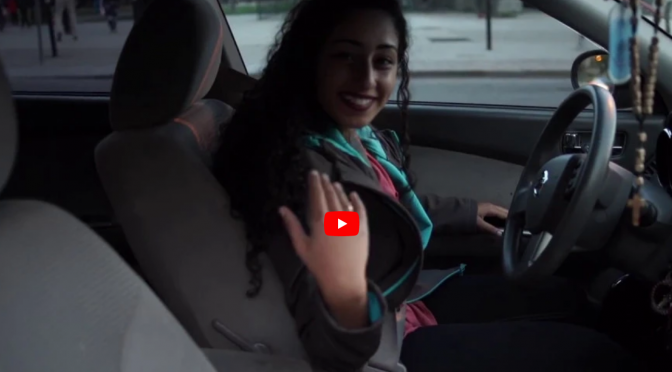 Update: We have just found out that only few weeks after launching and claiming over 3,000 in downloads, the app, DriveHer, has been hacked and all user data taken. DriveHer had to suspend operations as soon as they found out.

“As a precautionary measure, we are writing to let you know about a data security incident that may involve your information on March 30th -April 3rd, 2018. To our knowledge, the data accessed did not include any credit card information.” DriveHer rep said that they are looking to see what happened and figure out how data got compromised.

Not the best publicity for the newly launched app and might drive female users to stick with Uber or Lyft instead.

Women only ride sharing business, DriverHer, similar to Uber and Lyft has recently launched in Toronto with a lot of media covering the company.

Aisha Addo, an app founder of DriveHer, said idea came to her when taking a taxi one night with a male chauffeur who became asking her personal questions about her dating life and if she lived alone. She said that made her feel very uncomfortable and she has decided to do something about it.

Interested in learning more about DriveHER, and how you become a driver? Please visit the link in the bio. – (Repost: Thank you @yourmorning for the coverage.)

Addo said that the app has had over 3,000 downloads on Android and iOS in the past two weeks with over 100 female drivers have signed on as well.

Not everyone was happy though, some potential male customers wondered if this was discriminatory and against provincial human rights:

@PatForanCTVNews and @CTVNews: what is wrong with you? #Toronto is one of the safest city and we do NOT need #DriveHER. This is #Discrimination and #gender issue. Even Saudi Arabia moved ahead and you are going back. #Leave_Religion_Out_0f_People_Life

Based on how much money these services lose per year it might be a difficult business model to operate.

Uber/Lyft should just be offering a better experience so that riders feel safe regardless of gender.

A lawyer, Saron Gebresellassi, working for DriveHer disagreed that the app is against provincial’s human rights:

“DriveHer is entirely compliant with provincial human rights legislation. There’s no prejudice to the men. They’re not going to be stranded. There’s other alternatives for them to get around. Men aren’t being persecuted by not availing themselves of this taxi service.”

This service is similar to women only subway trains or bus rides in countries like India or Mexico where male dominated culture oppresses women. However few feminists point out that segregating male vs female does not solve an issue of why women feel unsafe.

Love it or hate it, we live in Canada, where ideas and success of ideas are essentially decided by market supply and demand. And now you have other options to Uber or Lyft, particularly if you are a female taking a ride alone at night.