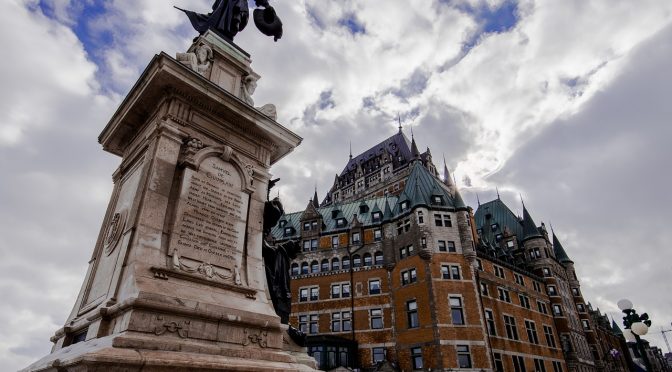 UPDATE 1: Some people have disagreed with salary #s indicated in this article for Montreal market, instead of including one $, we have updated it to provide a range. Please note all salary #s are with bonuses included.

We love how beautiful Montreal is in the summer, the European charm, the Old Montreal streets, so one day you decide to move there, get a job and become a good member of society.  Quebec they say is one of the most socialistic places in North America however it is also the most taxed place.

If you are a senior software developer / programmer with 8+ years of experience you might get recruited by big companies in Montreal like Morgan Stanley or Ubisoft. The salary you might get will be around $90k-$110k plus say $10k-$20k bonus and stock options – so about $130,000 through payroll.

What a lot of Quebec marketing campaigns do not say when trying to attract talent is that you will pay $10,000 more than say in Alberta. You will say – hey at least I get cheap day care – not so fast – you will now need to pay $20 a day or more a for subsidized daycare  and around $40 a day for private daycare if your household salary is over $100,000.

Seth Daniel, developer who recently moved to Montreal from San Francisco, is not very happy about his new adoped city’s taxes – “atrocious … low.. salaries  with the highest taxation. Seriously the lowest paid dev salaries in the western world” as he calls it:

I am actually from SF (now living in Montreal) so I can tell you from experience that my dev friends in the Bay Area making 140k are doing much better than we ever will in Montreal. Indeed, rent is cheaper here but literally everything else is WAY more expensive. I was in Tennessee last summer and was able to go to the grocery store, spend $60 and feed a family of 5 for an entire week. The cost of living argument is really weak when you take more than just rent into consideration.

We compare 4 salary brackets and amounts taxed in 3 provinces below:

* please note all salaries indicated are with year end bonuses attached to them.

However before jumping to conclusions – you should compare all the costs of housing, education, insurances, etc.

For example when it comes to early education, few people in Quebec business community commented that, in the rest of Canada (or ROC), you are at disadvantage when you have kids going to daycare because in Quebec you just pay about $15-$20 a day vs $40-50 in ROC. Even though Quebec advantages might soon come to an end due to neighbouring Ontario’s recent annoucenment promising to let all 2.5 year old and older kids go to day care for free.

So even if you exclude Ontario, in Quebec you still would need to have 3 kids subsidized day care (which is very hard to get into) to offset $10k in extra taxes you will be paying as senior dev.  Also that is only for 3-4 years before they go off to elementary school. And unlike rest of Canada, in Quebec, you will most likely send your kids to private school either in French ($4,000+ a year) or English ($12,000+ a year). Unless you want to send them to public school with up to 20% drop out rates (highest rates in Canada). Private schools in Quebec generally have much higher success rates, no matter the language.

But before you get excited, even with lower cost of living, and subsidized day care, you will most likely get salary about 20% less in Montreal than in Toronto or Ottawa for example. That could be a difference of around $20,000 for a senior web / app developer.