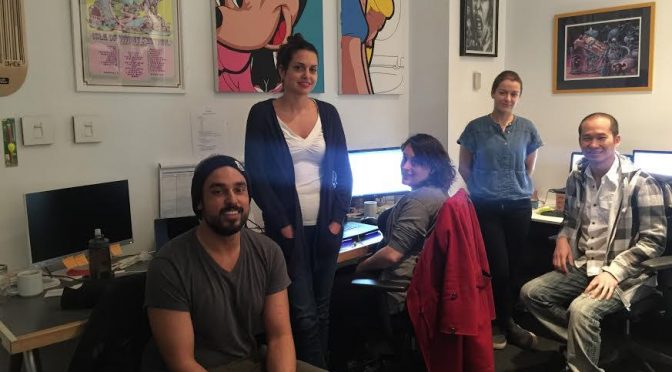 Play The Future is a mobile app where players can make predictions on a wide-range of trending topics: entertainment, politics, business, technology…even the weather. Brands can also participate through sponsored predictions, e.g. “How many glasses of wine will be served on VIA Rail trains during Thanksgiving?” Our philosophy is “Life’s a Game” and “If it can be measured, it can be played.” We have combined the appeal of trivia games with our inherent human need to know the future and an innovative advertising revenue model.

“A breakthrough brand engagement tool that addresses the splintering of attention, the proliferation of ad-blockers and the wholesale rejection of push marketing”

Who started the company? Do you / team members have tech background?
Play The Future was launched in January 2016 by a team of co-founders including Andy Nulman and Parisa Foster. Andy is a successful entertainment and media veteran, having co-founded Just For Laughs and Airborne Mobile, a mobile content provider which sold in 2005 for $110 million. Parisa has extensive experience in mobile apps, having worked in the field for over a decade and having held the role of VP Marketing & Business Development at Budge Studios.

How are you being financed?
Play The Future is backed by venture capital firms and angel investors.

What do you think will be / is a big obstacle to overcome?
We have to make the branded predictions as entertaining and relevant as the original content (e.g. predicting box office stats or the total hits in a hockey game). Our editorial team’s strength is in transforming the brand’s marketing message into a fun a prediction game and our players have come to enjoy them as much, as sometimes more, than the non-branded content. That said, perhaps the biggest obstacle is bringing more brands to the table and show them the depth of engagement we provide.

How do you go about finding good developers / IT guys for your company?
We were lucky that an A+ developer (Van Du Tran), whom Parisa had worked with previously, was fascinated by the project and wanted to come on board immediately. Anyone we hire should already be a fan of the app.

How are you intending on taking your company to million dollars in revenues? In what markets?
Our primary revenue stream is having brands pay every time a player engages with their content on the PTF app. We launched in Canada in 2016 and just launched in the US in February 2017. It’s all about getting as many brands on-board and rolling out internationally.

What is the big lesson you’ve learned (success or failure) with this project.
It’s better to have 50 people that LOVE your product vs. 1000 that think it’s just OK. We’re seeing incredible engagement and retention for a mobile app, so we know we built a sticky product and the next step is to increase awareness

Watch Andy Nulman explains the concept to Breakfast Television in this video: