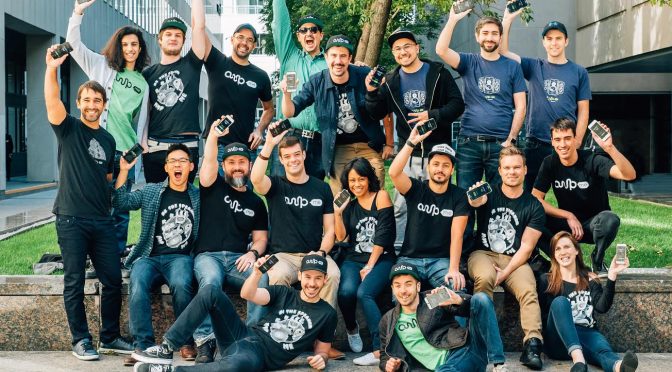 AmpMe is the mobile app that allows users play music in perfect sync across multiple devices to create one powerful sound system.

Who started the company? Do you / team members have tech background?
AmpMe was launched in September 2015, and was founded by Martin-Luc Archambault. The idea came about a year earlier when Martin-Luc was at a friend’s new apartment celebrating her move. They wanted to listen to music, but she didn’t have her speakers unpacked. They ended up putting a phone into a plastic cup to amplify the sound. Martin-Luc decided that there had to be a better solution to the problem, and he spent a year investing his own money to create what would become AmpMe.

At the age of 21, he created, CDT Inc., a web publishing & advertising company, and quickly grew it to profitability before selling it to Zango within three years

In addition to his role as entrepreneur and investor, Martin-Luc Archambault stars on the French Canadian version of the ABC hit show ‘Shark Tank’, known locally as ‘Dragon’s Den’ or ‘Dans l’œil du dragon’

What do you think will be / is a big obstacle to overcome?
When AmpMe first launched, one of our biggest obstacles was that some people had really poor speakers on their mobile device which degraded quality. Since then, we’ve launched on bluetooth speakers creating the ability for anyone to connect a quality speaker to any phone. Also, each new generation of iPhone and Android has better speakers than the one before. Like phone cameras, they will develop to a point where external speakers are less and less necessary for the average person.

Another obstacle is making sure our users have access to as many music sources as possible which is why we’re working hard to connect new music streaming services. We just launched on Spotify and there are more coming soon.

How do you go about finding good developers / IT guys for your company?
a) ask your current guys to tell you who they would die to work with (and try to hire them)
b) be present in those startup dev events and network
c) once you’ve found the guy make him an offer he can’t refuse: start with selling the vision and give him a big enough challenge (salary should be at least as good as competition but not most important thing) Who is your biggest competition?
There are companies that offer the ability to sync multiple speakers together but they require the same hardware or don’t work across different operating platforms and are very expensive. AmpMe is the only solution to work across both Android and iOS and connect to any brand of Bluetooth speaker.

How are you intending on taking your company to million dollars in
revenues? In what markets?
AmpMe is currently focused on building the best product possible and growing our user base, we expect to see revenue numbers in the next few years.

What is the big lesson you’ve learned (success or failure) with this
Project.
It’s risky to rely upon 3rd party APIs for your business. So it’s important that you establish great relationships with these partners and make them understand the benefit that you’re bringing to the equation. Sell them on the vision that it’s in their best interest to keep the relationship going in spite of any hiccups. Also, try not to put all your eggs in one API basket.

When hiring, don’t compromise your hiring process just b/c you got a referral. Put everyone through the same system of checks and proper process to ensure quality hires. For example, would you buy a new car you’ve never test driven even though it’s pretty and fast?

They are also hiring (and they promise if you get hired at AmpMe that they will send you on a nice, relaxing, all-inclusive vacation down South*. – http://blog.ampme.com/work-ampme-enjoy-vacation/) iOS Developer, Business Intelligence Analyst, and Android Developer in Montreal if you are looking for a job: http://www.ampme.com/jobs?locale=en_US