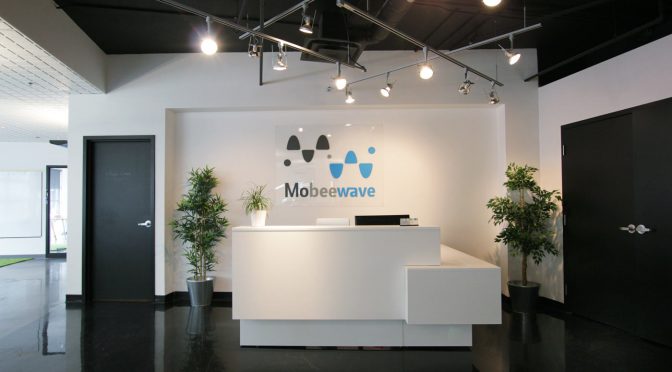 Based in Montreal, Mobeewave has developed a solution that enables anyone to accept money in person using just their phones. Harnessing the NFC capability and secure element of modern mobile devices, this patented innovation makes it possible for individuals or merchants to collect payment anywhere by simply tapping a phone with a contactless credit card or mobile wallet.

Mobeewave was founded by Benjamin du Haÿs and Maxime de Nanclas. Both co-founders have tech backgrounds having previously worked in the payment and embedded systems industries. The Mobeewave team has expertise in a host of subjects including NFC technology, microelectronics, digital payment and mobile architecture and ecosystems.

Mobeewave closed its Series A round of investment – which was led by SBT Venture Capital – in February 2015. The company is currently in the process of finalizing its second round of funding. Mobeewave has also received support from Créativité Quebec and Investissement Quebec. Developing a partnership with smartphone providers and gaining access to the security components on devices has taken time. But by working closely with them – as well as payment technology companies and financial institutions – we have gained valuable insight and support, along with the opportunity to carryout practical applications of our solution.

In addition to building a network of developers, the company participates in various startup meetups. By organizing such events at our offices and also gaining local press coverage, the company has been able to present what life is like at Mobeewave. The company also regularly attends jobs fairs, leverages developer platforms and engages recruitment agencies. As the only certified in-person payment service, Mobeewave’s patented technology doesn’t really have a direct competitor. With the potential to be used in both the P2P and micro-merchant space, Mobeewave can be both an alternative and a complement to services like PayPal, Venmo, Square and iZettle.

We’re working with acquirers, issuing banks, payment technology companies and smartphone manufacturers, particularly in mature contactless markets – such as Australia and Canada. Our aim is to continue to leverage our relationships with such organizations to make our technology available to both merchants and consumers. We plan to soon replicate this approach in expanding contactless markets like the US and the UK, as well as emerging markets – such as India.

What is the big lesson you’ve learned (success or failure) with this project?

We’ve learned that as we move towards a more cashless world, there’s a real need for a practical and secure digital alternative to in-person cash transactions. We’ve been encouraged to discover that not only do financial institutions and payment technology companies share this view, but it’s also something consumers and merchants realize too. We’ve also been pleased to find out that banks and smartphone manufacturers have a genuine willingness to collaborate with FinTech companies to offer the best innovations to their customers.