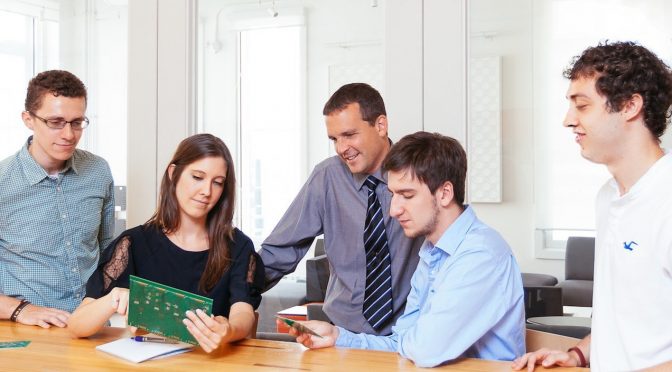 SnapEDA is a parts library for circuit board design. We provide digital content — similar to blueprints — that help designers bring products to life quickly. Our library is used by tens of thousands of hardware designers, from small shops to engineers at household names like Samsung.

SnapEDA is building the canonical library for circuit board design that every hardware designer will use. By providing ready-to-use building blocks for design, our library shaves days off product development time, allowing designers to focus on optimization and innovation. Tens of thousands of engineers worldwide rely on SnapEDA to design faster, whether they’re making smartwatches, drones, or robots.

As an Electrical Engineer who wanted this product to exist, Natasha Baker (founder) decided to delve deeply into learning software a few years after graduating to get it off the ground. Once she did that, she recruited other engineers and computer scientists to take it to the next level. Team is now consist of 6 electrical engineers and a designer.

The company was initially self-funded, but we have since raised funding from investors.

Our biggest competitor in “not invented here syndrome”. Traditionally designers have made their own digital content for circuit board design, right down to the generic bits and pieces. The hardware world has not yet embraced the modular, open source approach that software development has. And for good reason — unlike software, circuit boards exist is the real world, which makes errors very costly and time-consuming to resolve. However, once designers use SnapEDA and see its unique approach to verification, they don’t switch back to their old ways of doing things.

With this project being Natasha Baker’s first startup, she has learned that startups have a lot of ups and downs. Think of it like a sine wave. Learn methods of bouncing back into the positive and you’ll be unstoppable!

You were based in Toronto before but now you have moved to San Francisco – why is that?

The company was started in Toronto. Both Natasha Baker and our product manager Mike Tang graduated from the University of Toronto from the Electrical and Computer Engineering (ECE) program. In the early days, the strategy was to recruit interns from local schools, including the Computer Science program at U of T, Computer Engineering at Waterloo and several designers from the New Media joint program between Centennial College and the University of Toronto. These students helped us bring things to life on a lean budget, and learned a ton in the process. To this day, we still consider them a part of our team, even if they have gone off to work on their own projects or in completely different industries.

Once we got into Y Combinator, we moved the company to the Bay Area for now because this is where a lot of semiconductor and electronic design software companies are based.