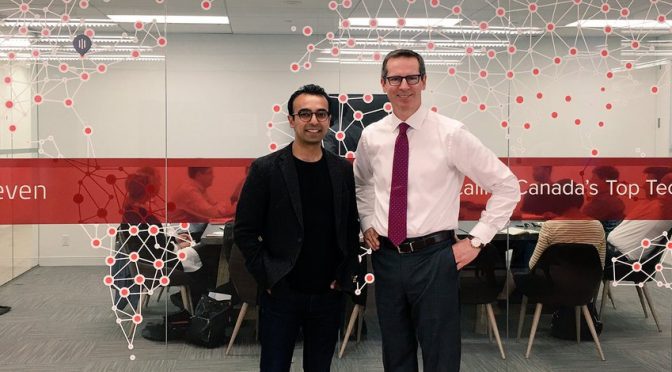 Oxford and OneEleven team up to create a new Toronto innovation district aiming to make Toronto as appealing as San Francisco. Their location is around Front St.

325 Front St West used to be a data centre for for Royal Bank. Five story 250,000 sq ft building will house hundreds of startups once complete.

OneEleven has already moved into the building in January 2017 and expended its operations. The accelerator helps companies after they raise between $1m-$5m with office space.

Participating startups usually pay membership fees instead of giving up their equity and usually stay around 12-18 months employing up to 40 employees.

The Front Street hub will also be good for Oxford since graduates will inevitably seek out new office space as they outgrow OneEleven. 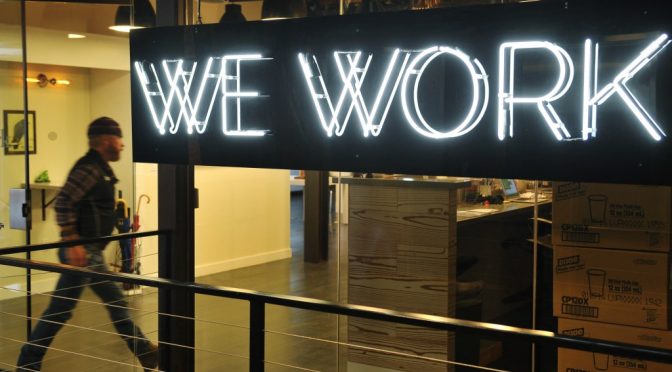 WeWork said they will be opening new Canadian locations in Toronto as well as Vancouver.

WeWork provides the space, community, and services anyone would need to make a life, not just a living. They transform buildings into beautiful, collaborative workspaces and provide infrastructure, services, events and tech so companies can focus on doing what they love.

WeWork 360 is a new way of sharing our spaces. By allowing you to choose your own path, you can decide where and how you want to interact with our space virtually; it’s a curated experience where you can focus on the moments that are most meaningful to you, just like working in a WeWork. Click around to explore!

Toronto office will be opening soon at 240 Richmond Street West location downtown Toronto. The office should be able to accommodate up to 1,000 people.

Looking for workspace right in the heart of Toronto’s tech hub? WeWork Richmond Street West has transformed this beautiful 100-year-old building into six full floors of private offices, coworking space, and meeting rooms. Give your business organic opportunities with a community of forward-thinking companies, events organized onsite by our team, and the local neighborhood’s surging economy. Right around the corner from Osgoode Station, WeWork Richmond Street West makes commutes a breeze, and offers plenty of delicious options for team lunches. This is a space that supports your good ideas.

Vancouver office will be a bit larger at 595 Burrard St location in Vancouver financial core. Office should be able to accommodate up to 1,500 people.

Marking WeWork’s introduction to the city of Vancouver, WeWork Burrard Station spans five floors of a building that’s truly a lifestyle hub. Retail, fitness facilities, bike storage, and parking sit below the building, and a quick walk takes you to world-class shopping and restaurants on Robson Street. The Burrard Street SkyTrain Station is directly integrated via an underground connector, and approximately 1,200 buses stop in front of the Bentall Centre each day. Needless to say, your commute will be a breeze. The area attracts businesses of all kinds, both small and large, so you’re sure to be in good company. Try JOEY, a bar in the tower’s basement, for after-work drinks. If you’re searching for innovative shared workspace in Vancouver, look no further than WeWork Burrard Station. 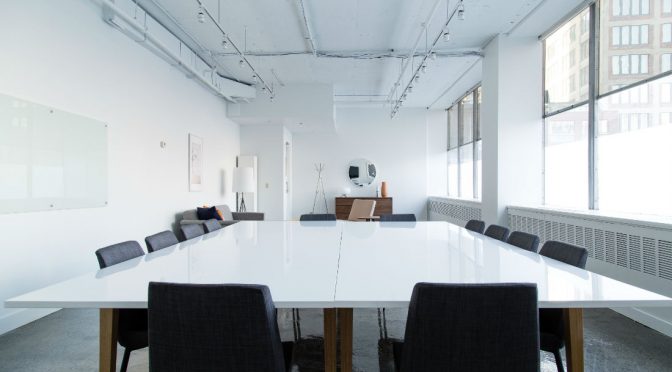 Breather’s aim is to connect the world’s spaces into a network and make them globally accessible via software. Through software, networks, and vision and with a focus on customer experience and design, Breather allows everyone to access space that suits them, anywhere in the world.

Breather aims to be a reliable solution in people’s work lives, with seamless service, conveniently located spaces, and a high standard for our user experience. Ease of use is central to what Breather offers. The spaces are consistently inspiring and beautiful, well designed and thought out. Breather’s multi-functional designs speak to a diverse community of professionals, helping individuals and groups work however they are most comfortable and productive: around a big table, brainstorming in the lounge or writing out strategy soon the whiteboard.

See video below of How to work better, by design. What kind of space makes a person feel inspired, creative and professional all at the same time? What are the types of environments that foster connection and allow for brainstorms and collaboration? Breather’s designers and researchers have studied how people work today. Breather is interested in the relationship between people and space, and what it means to create workspaces that promote productivity and collaboration.

Who started the company? Do you / team members have tech background?
Founded in 2012, by Julien Smith, CEO, and Caterina Rizzi, CCO, Breather connects people to the world’s spaces by making them accessible via their proprietary app. Each space in Breather’s 300+ global network is specially curated to be peaceful and practical and can be booked for any length of time. Located in 10 major cities across North America and the UK.

How are you being financed?
Recently in December 2016, Breather, raised a Series C round of $40 million. The funding brings Breather’s total capital raised to $73 million. Menlo Ventures led the round joined by Valar Ventures, RRE Ventures, Slow Ventures and Real Ventures. Who is your biggest competition?
We feel that Breather doesn’t really have a direct competitor, as what we do by offering private on-demand spaces, currently does not exist in this manner. However, if we were to identify the competition, it would be companies like Peerspace, Liquidspace, Sharedesk and apps from traditional office rental businesses like Regus that now allow booking of rooms via mobile.

How are you intending on taking your company to million dollars in
revenues? In what markets?
Founded in 2012, Breather operates approximately 300 spaces across 10 markets, including in Chicago, New York, San Francisco, Washington D.C., and outside of the U.S. in Toronto and London.

Breather intends to use its Series C capital for hiring, and geographic expansion, including further saturation where it already offers workspaces, and new cities as yet to be determined. 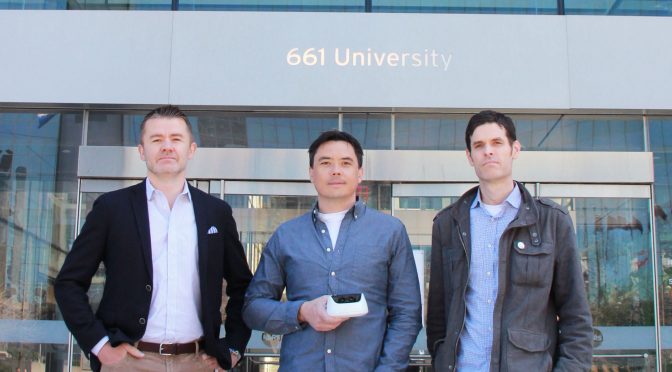 Who started the company? Do you / team members have tech background?
InnerSpace was founded by James Wu, Jason Gamblen, and Matt MacGillivray who worked together at eReading giant Kobo and played instrumental role in the company’s $315-million sale to Rakuten. Together, the team has been a part of 5 successful start-ups and now bring their product, UX, design, dev and digital expertise to solve a problem that represents a $250-billion opportunity.

How are you being financed?
The company has been bootstrapped for the last two years with the support of family friends. Now, we are closing in on our Seed Round which will help us produce the InnerSpace sensors and increase our customer pipeline. We recently announced an investment from venture fund 500 Startups and joining their accelerator which has helped us to catapult our sales.

What do you think will be / is a big obstacle to overcome?
Delivering indoor maps and positioning is a massive problem, but with massive market potential. There are hundreds of companies trying to deliver indoor experiences – like wayfinding apps in shopping malls, or equipment tracking in warehouses – but all of them struggle to get the mapping data they need to deliver great/cost-effective/timely experiences for their customers.

Our biggest opportunity and challenge will be to serve both the companies who want to deploy InnerSpace internally as well as the emerging tech companies who are developing apps based on the data. We are taking a huge bite out of this problem, and are ready to meet the challenge – scaling effectively will be where we’re focused for the next phase of our growth.

How do you go about finding good developers / IT guys for your company?
Toronto has always had access to great talent – especially with such strong ties to the Waterloo community. A few years ago, we were losing a lot of this talent to the Valley, but now we’re seeing the reverse – talent is staying here and US developers are seeking out Toronto start-ups. We have an excellent roster of VCs, founders, and incubators here to support the community and foster the development of talent here.

Who is your biggest competition?
We believe our biggest competitors are going to become our best partners. These are the companies that are creating maps by hand, who are taking months to create maps and insights, and whose data is out of date if any changes are made to the physical space. Typically, these companies really want to deliver cool apps and digital experiences, but they can’t scale because of the manual approach to creating maps. That’s where we come in – we help them scale. We let them focus on what they really want to be doing. We help them grow their business quickly. This is the true potential of InnerSpace.

How are you intending on taking your company to million dollars in revenues? In what markets?
InnerSpace is a location-as-a-service platform, which means customers subscribe to our platform for pennies on the square foot. When you consider that our technology can help companies discover new revenue streams, save operational costs, and increase sales, our business model makes it easy to understand the ROI. We will serve commercial real estate, retail, healthcare, and warehousing. As an exaple, one of our big box retail clients plans to increase sales by $2-million per store simply by helping customers find items on their shopping lists. Our fee will be approximately $10,000/store (just 0.5%!) and there are more than 400 stores in North America.

What is the big lesson you’ve learned (success or failure) with this project.
The most transformative realization so far is that we didn’t just want to create a better technology for the industry. Plenty of technologies have been created in the past – but customers found them difficult to use, they took too long to implement, they didn’t scale. Simply, customers found them cumbersome.

While we are incredibly proud of our technology, it is our approach to solving our customers’ problems that is where the true value of InnerSpace lies. Our customers want an instant, turn-key solution that solves the hard technical problems of mapping and location. They need a clear path to create new revenue streams and the data to better their business today. We view each customer interaction a success when they stop thinking about the techology and start envisioning how our platform solves their business problems. 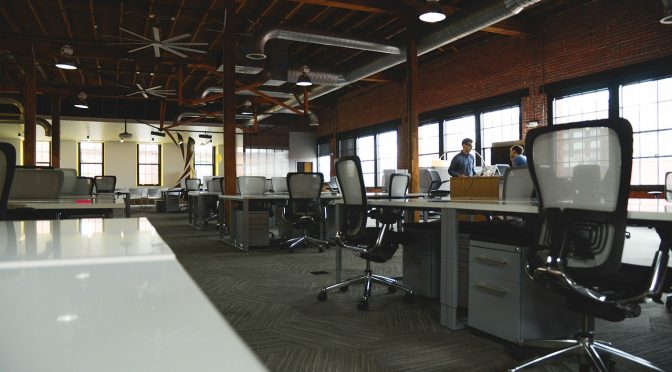 Most corporate offices are made up of fluorescent lights, bare beige walls, dated technology, and the dreaded cube farm. But some companies—like Hootsuite, Unbounce and 500px—offer employees much more creative, colorful and conducive workspaces.

You can see 30 photos of Canadian top startups and the culture that they reflect.

Time is free, but priceless. ⏳

A post shared by Matt bouchard friend (@yourfriendmattfriend) on Jan 6, 2017 at 1:13pm PST

Meet Jason! Jason is a Customer Success Coach. His favorite part of his job? “Getting to work with a ton of really talented marketers in so many different industries!” Before Uberflip, Jason worked in marketing and sales at a few different technology companies and even started up a student publication called “Recess Weekly” while in University. Want to join Jason’s team? We’re hiring! #ufculture

From the office. #mtl